Jan Rumi, a Bangladeshi-American accountant living in Hawaii, planted the seeds of Aloha Social Services Bangladesh (ASSB) when he came to an Aloha Medical Mission board meeting in 1997 asking for help. Jan grew up in Dhaka, the capital of Bangladesh, in a middle-class neighborhood that had gone downhill. Rather than sell the family home after their parents died, Jan and his siblings decided to use four unrented rooms of the house as a free clinic for women and children.

Emergency physician Craig Thomas and his wife, writer Susan Scott, a former nurse, volunteered to help, along with a family practitioner from New Mexico, and her husband. With Jan and several of his Dhaka family members, the AMM volunteers set up a modest primary care clinic, hiring a local pediatric resident to see patients 4 hours a day, 6 days a week. Jan's brother-in-law, Dhaka dentist Reza Karim, volunteered to be the on-site manager and see dental patients once a week.

The doctor's salary, fair by local standards, was $125 per month with medications and other clinic supplies and additional $125 per month. During the first 12 months, the doctor saw 4,246 patients. Average cost per patient: 70 cents.

After returning home, the 4 volunteers who had gone to Bangladesh donated a total of $2,000 to AMM. The board of directors agreed to pay $3,000, the cost of the clinic's first year. Until Craig and Susan returned to reimburse him, Reza Karim paid all expenses.

A large number of patients seen at the clinic were blind, or nearly so, due to cataracts. For reasons unknown, the average age of cataract onset in Bangladesh is 35. Malnutrition from vitamin deficiencies was another chronic illness seen often in the clinic.

To continue the clinic, and to hire a part-time nutritionist to teach patients about healthy diets, Jan Rumi and Craig Thomas asked the AMM board for $5,000 for the next calendar year, 1998. The board pledged the funds.

In 1998, Kailua ophthalmologist George Nardin donated a full-sized operating microscope to the clinic. Craig and Susan paid $2,000 to have it packed and shipped to Bangladesh. Reza Karim was forced to pay another $2,000 of his own money to get it out of a customs "hold" (this kind of extortion is common in Bangladesh.) Finally liberated, the microscope was delivered—broken. No one in Bangladesh knew how to fix it.

Craig and Susan traveled to the clinic in 1998 with Jan and Tripler Army Hospital ophthalmologist Karl Holzinger, an AMM volunteer who brought his own portable operating microscope. In Jan's childhood bedroom, Karl removed cataracts and inserted intraocular lenses into the eyes of patients lying on a wooden table. The team hung IV fluids from the rafters. AMM volunteers fixed the broken microscope and hired a part-time local ophthalmologist to continue the cataract operations.

Due to family, health and job burdens, Jan Rumi's commitment to the clinic waned over the next several years. Reza Karim (Reza's wife is Jan's sister) took over management of the clinic using members of his large, extended family as unpaid workers.

Craig and Susan continued to visit the clinic yearly, sometimes recruiting volunteer doctors, other times going alone. The neighborhood's pedestrian traffic, rickshaws and commerce grew so dense in the ancient, narrow lanes that it took a car two hours to drive the 5 miles from Reza's home to the clinic. Reza deemed the streets unsafe traffic-wise for AMM volunteers to walk or take a rickshaw.

Inspired by the Dhaka clinic's accomplishments, in 1998, Reza Karim's wealthy, elderly father encouraged his 7 adult, well-off children to start their own clinic for the poor. The father donated a corner of the walled, ½ acre family compound in Dinajpur, and the siblings asked Craig and Susan for assistance. They couple traveled to Dinajpur, an 8-hour journey from Dhaka by car, and helped set up clinic # 2 in the style of the successful Dhaka clinic. 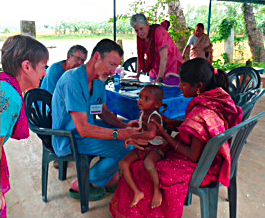 During the next 3 years, AMM volunteers traveling to Bangladesh worked in both Dhaka and Dinajpur clinics, seeing patients and making recommendations. In 2000 Craig saw two children at the Dinajpur clinic with bilateral club feet and arranged for them to come to Honolulu Shriners Hospital, one at a time, for repair. Craig, Susan and Reza Karim made all the children's arrangements (passports, visas, Shriners admissions, care and lodging) and paid the round-trip airfares and all expenses. Shriners treated the children for free, and AMM volunteers returned the children, walking normally, to their parents in Bangladesh.

During those 3 years, Craig and Susan annually asked the AMM board for, and received, $8,000, $6,000 for the Dhaka clinic and $2,000 for the Dinajpur clinic. Karim family members managed both clinics, enlisted extended family members to work for free and donated whatever other funds were needed to meet expenses. Each of those years, Craig and Susan made $5,000 directed donations to AMM and solicited donations from friends and family.

The Dhaka clinic neighborhood declined so severely that in 2001, Reza Karim closed the original clinic. Jan Rumi and his siblings sold the family home.

The clinic in Dinajpur, though, managed and supported by Craig, Susan and the Karim family, grew with astonishing speed and efficiency for a country where everything is difficult. Each year Craig and Susan visited they were amazed to see all that the Karim family had accomplished and to hear their plans for future projects. These included creating a primary school as a way to feed malnourished children seen in the clinic, and offering microloans, with training, to their parents and other poor people in the neighborhood.

During their project expansion, the Karim family changed their government-registered charity name from Aloha Medical Mission Bangladesh to Aloha Social Services Bangladesh (ASSB.) This name included the clinic and projects directed toward the root causes of the illnesses seen in the clinic: malnutrition, diarrheal diseases from contaminated water, local infections from being homeless and unclean, and domestic violence driven by grinding poverty.

Within the Dinajpur family compound, where several of Karim family members lived, they: 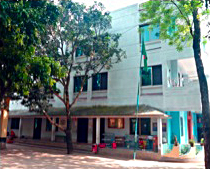 Before the Karim patriarch died, he directed his children to erect a building and create another clinic on an empty acre of rural, family-owned land in Nagoan, his and his deceased wife's ancestral home, a 4-hour drive from Dinajpur. The father and siblings paid for the initial building with German aid. One of the sisters, Chobi, visited a friend in Germany to ask for charitable help with the Nagoan clinic and received a commitment from a team of German surgeons and their assistants. With the Karim family, the Germans continue to support the Nagoan facility, which now has 3 buildings that include a clinic, a school and a dormitory for visiting doctors. AMM does not contribute money to the Nagoan facility, but when they come to Dinajpur, AMM volunteers are invited to (and do) see patients in Nagoan.

As of 2013, the Dinajpur and Nagoan locations have much-needed new buildings housing primary care clinics; operating and recovery rooms for eye, gyn and other surgery when feasible; a new school building with rooms through 10th grade, micro-credit programs including teachers and managers; rooms with teaching equipment, such as sewing machines; and modest accommodations for visiting medical teams.

In addition, the Karim family has built 104 apartments in attractive row houses for the homeless in Dinajpur with plans to complete another 20 by 2014. As much as possible, the Karim family managers hire the homeless for house construction, digging deep-water wells, planting and tending vegetable gardens, and building composting outhouses. In this way, the workers learn new skills as well as healthy living practices. Residents there are encouraged to take micro-loans with job training.

From 1999 through 2012, the Dinajpur clinic has seen 29, 276 patients. The microcredit loan and homeless projects help approximately 8,000 poor families. 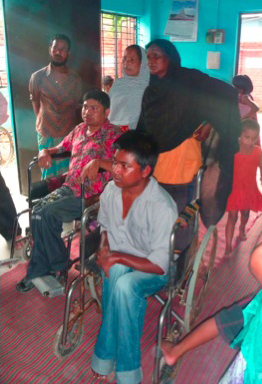 Craig and Susan thought in 1997 that they would go to Bangladesh once. Their trip in 2013 was their 14th, the continued visits spurred by the enthusiasm, efficiency and love of the Karim family. In turn, the visits of Craig, Susan and other AMM volunteers inspire the family. Together they consider the success of the projects the result of trust, teamwork and much aloha.

Several members of the Karim family have made these charity projects their life's work, and others such as AMM, Central Dhaka Rotary, Shanti Bondhu Bangladesh (Germany) and Inner Wheel (local cataract and intraocular lens aid) support them financially and spiritually. In 2012, Chobi traveled to Switzerland and secured a grant to build the school and add more classes. These caring people live their Muslim belief that it is the duty of the wealthy to help the poor.

Charity work in Bangladesh is challenging for everyone. The Bangladesh government is notorious for corruption, the crowds are crushing (160 million people in an area the size of Wisconsin), and grinding poverty is visible everywhere. Even the wealthy have hard lives with rolling black-outs, no potable water, endless bureaucracy and nightmare traffic. In addition, a persistent "males-first" mentality makes it hard to help women and children, people who desperately need assistance. Fortunately, the influential Karim family members persevere and manage, somehow, to get around the obstacles. The result is that together, we are changing lives.

how to get viagra buy generic viagra